“Little…If you can touch it, you can catch it!” my 8th Grade football Coach Dan Beckelman spit as he yelled at me on my way back to the huddle. It was a seemingly meaningless football practice in the fall of 1989 that would change my outlook on the simple things and the little details that can change your fortune. Coach Beckelman called a play action pass play in practice in which I was the main target. Our Quarterback had overthrown me, and the ball deflected off my outstretched left arm. At the time I thought I made a valid effort to try to catch the pass. On my way back to the offensive huddle Coach Beckleman let me have it. No one wanted to disappoint him, and I was no different. I thought about what he said to me and it sunk in. I told myself from then on out I would jump or dive or do whatever it took to catch any pass thrown my way. He made a valid point and it changed my outlook on effort and catching a ball ever since.

Fast forward slightly to my senior year of football in November of 1993. It was the 3rd playoff round (Regionals) in which our Pilot Point Bearcats were facing off with another tough opponent the Kerens Bobcats. Once again, the game was at Pennington Field in Bedford Texas. Right down the road from where I grew up and attended Junior High as a Central Spartan prior to moving to Pilot Point. My teams never lost a game in that stadium growing up and I certainly didn’t intend to lose a game there as a senior in high school either.

Clifton Hall, from Kerens Texas, was the best Running Back we ever played against in my opinion. Our Coaches had prepared us for his speed and quickness, but once the lights came on that Saturday night in November there wasn’t much we could do. He was on another level. I remember at one point he has an eyelash away from breaking a 99 yarder on us and somehow Paul Dennis tripped him up. Clifton Hall still ended up rushing 28 times for 251 total yards and 2 touchdowns against us, but it was the 1 yard he couldn’t get late in the game that made a world of difference.

Kerens was up on us 12-7 and driving on us late in the game. The game came down to a fourth-and-two at our 32-yard line with less than 4 minutes left in the game. Everyone knew who was going to get the ball, but we also knew that we had not stopped him all game long. Somehow, led by our All-State defensive tackle Kent Williams, and our defense held firm and stopped Clifton Hall 1 yard short of the first down marker.

That kept our hopes alive, but we would have to drive 68 yards in the final 4 minutes to advance. Somehow, we put together a drive that culminated in our own fourth-and-three play from the thirteen-yard line. It was basically fourth-and-our-season because if we didn’t convert our season and my tackle football career was likely over.

Coach Jones called our last time out before that final fourth down play. He gathered all the Seniors together and asked us to vote on what we wanted to do. Option 1 was go for a touchdown or Option 2 go for a first down. I remember my exact thoughts and I knew if we chose Option 1 the play was going to go to me. I’ve always had a “coach on the court” mentality so I felt like I knew the exact play that the Coaches would call either way. I thought to myself there is no way I can be involved in this decision because I didn’t grow up my entire life in Pilot Point and most of my teammates had. Therefore, if I voted 1 way and we failed I wouldn’t have been able to forgive myself. So, I didn’t speak up for either option. I decided to go with whatever the majority chose. The seniors unanimously voted to go for the end zone. I could hear Coach Lenny Gray telling Coach Jones the play in the headset and then Coach Jones repeated it. It was exactly what I expected. Pro Right, fake 44, TE delay. A play action pass to me. The Coaches knew that Kerens would be focused on our stud Running Back Derek Jones and therefore I’d be left open. As we broke the huddle I told our Quarterback, Chad Cole, that I’d be wide open, and I’d catch it. I was, and I did catch it. Just like I had done several times before in that same end zone as a Junior High kid. I adjusted and dove and caught the ball as I was going to the ground for the go-ahead touchdown with 1:34 left in the game. Lloyd Childers ran in the 2-pt conversion and we were up 15-12.

It certainly didn’t feel like the game was over though. Kerens got the ball back and we knew we would have to stop Clifton Hall at least 3-4 more times which would not be easy. They tried a hook-and-ladder play on my side and I broke it up defensively.  A few plays later they tried to throw a deep pass on my side and I intercepted it over my shoulder and went to the ground to preserve the win.  I was mobbed by our sideline. We gladly took the 15-yard celebration penalty and then Chad Cole took a knee to end the game. I shook more hands and hugged more necks after that game than ever before. It’s certainly my favorite high school football game of all-time.

I’m thankful for that “mean old-school junior high Coach” Dan Beckelman that ended up in the HEB Sports Hall of Fame. My junior high squad never lost a game in three years under his Coaching and I credit him for making me a solid receiver of the football. I’m also thankful for all my high school teammates and Coaches as there were many heroes in that game prior to me making those two memorable catches. If Paul Dennis doesn’t trip up Cliff Hall earlier in that game. If Kent Williams doesn’t make that tackle on fourth-and-two late in the game. If Coach Jones hadn’t put our fourth down play up to a vote of the Seniors. If Coach Gray didn’t believe in me he may have called a different play. A million little things had to go right for us to win that game and thankfully they did. This time the Cardiac Cats cut it as close as we possibly could.

So, we improved to 13-0, and were on to Round 4 of the playoffs setting up the match-up that everybody wanted to see.  #2 Pilot Point vs #1 Boyd. Once again, we expelled a ton of mental and physical energy. Did we have enough left in the tank to compete with the #1 team in the State the Boyd Yellowjackets the next week? 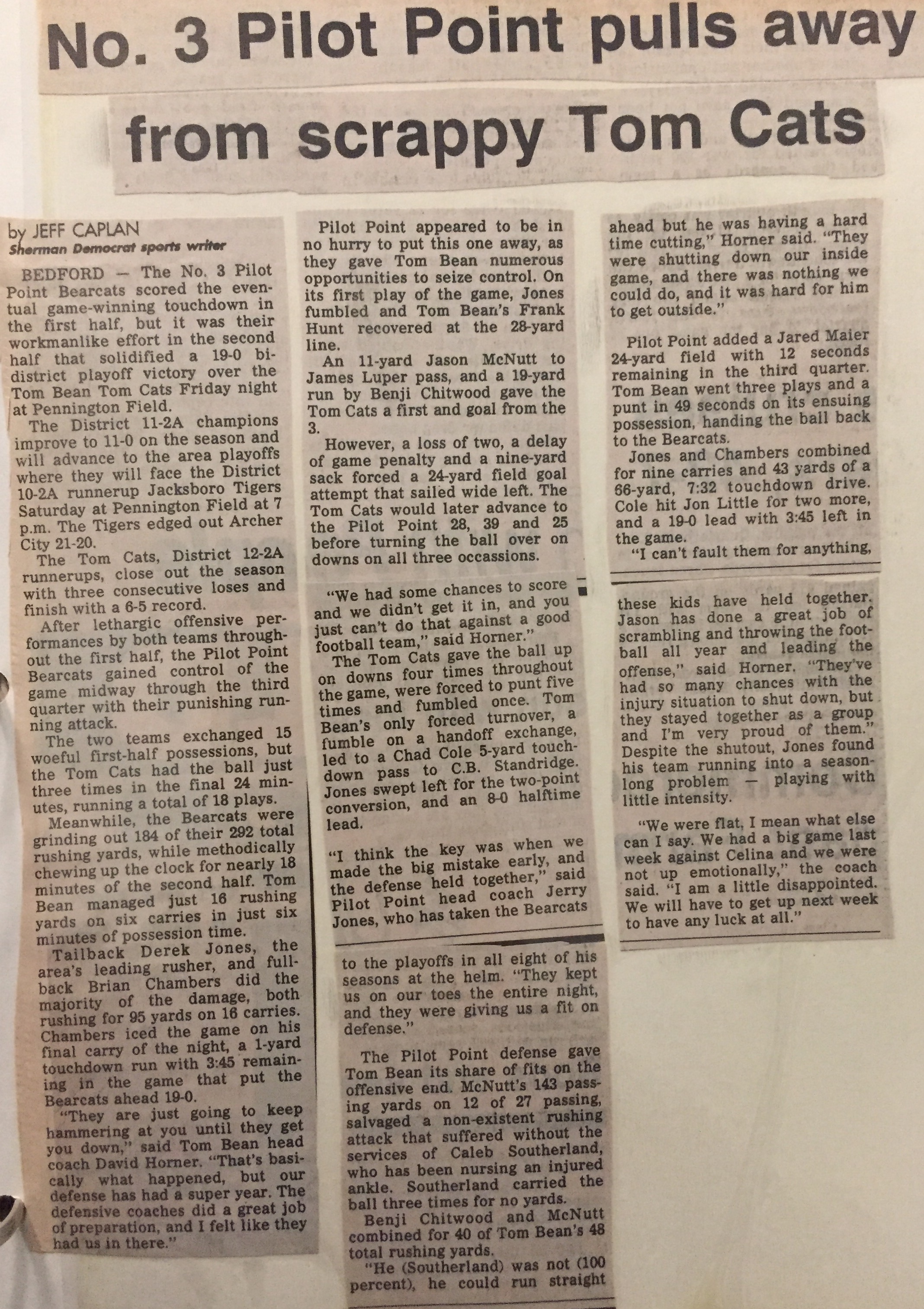