#10 Another One Bites The Dust

Twenty five years ago this week we were preparing to face off against Van Alstyne for the 3rd time in a year.  As I touched on in my week 2 edition Van Alstyne had upset us in 1992 on our home field. At that time we were the #1 vs #2 ranked teams in the State in our classification. We exacted our revenge, in the rematch at John Clarkfield, in the playoffs and ended Van Alstyne’s football season in 1992. So the grudge match was bound to be a good one early in the 1993 season. 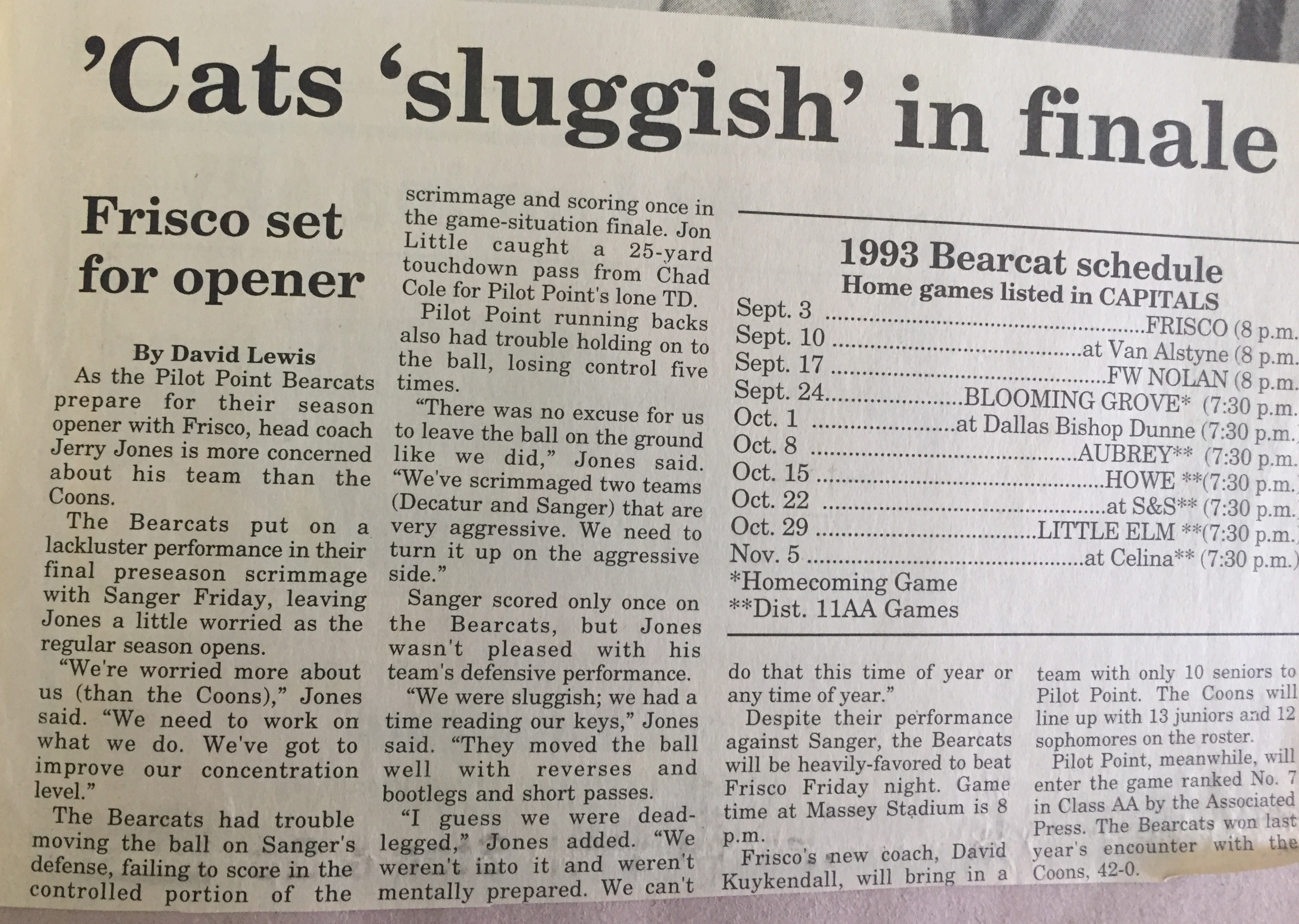 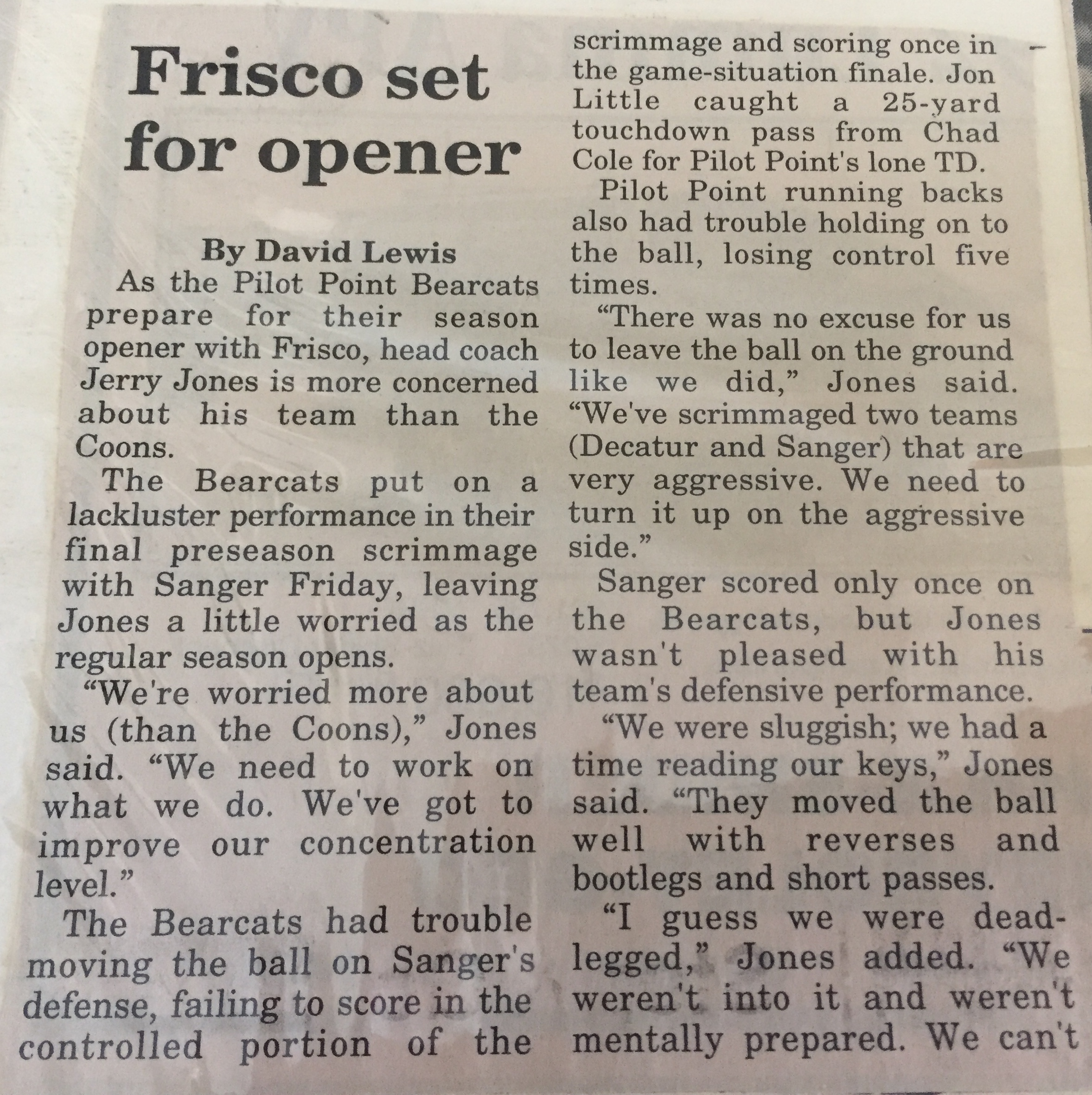 These articles have been fun to do for me as they seem to always conjure up a few memories or feelings about these games and moments that I haven’t thought about in a very long time. There are usually one or two key things that are etched in my memory.  This game is no different. For some reason I can remember two distinct things….a taunt and a compliment.
I’ll start with the taunt.  Warming-up for this game on Van Alstyne’s field. I specifically remember going through team stretches and we really couldn’t even hear ourselves think. The reason for that was that VA had a huge speaker down at our end and they had it blaring music. Specifically, the 1980 song from Queen “Another One Bites the Dust.” I remember VA playing this in the stands the season before in the playoff game and thinking to myself “they are bold playing this song again after what happened last game.” It only served to fire us up. The adrenaline was pumping and we were determined to get the win on their field. It ended up being a defensive battle, but we came out on top 14-8 in the end. The music thing reminds me of the only other time I can remember my team being that fired up by a pre-game shenanigan. We were warming up on Aubrey’s home field in 1992 and someone in their press box decided it was a good idea to seal Aubrey’s fate before even the initial kick-off. Some Aubrey knucklehead got on the PA system and told a joke saying that “Pilot Point had about as much of a chance of winning the game as a 1-legged man had in an ass kicking contest.” That’s what the guy said verbatim. You could have heard a pin drop on the field. When we went back to the locker room after pre-game warm-up and prior to kick-off you could sense that we were about to lay a smack down on the Chaparrals. 56 points later it turns out the 1 legged man aka Bearcats had won that contest handily. So remember this saying kids“if you taunt, it will haunt!”
So the other thing I remember vividly from that VA game my senior year is a compliment. Early in the game I made a nice left handed interception while keeping my feet in bounds on a ball that I think that the VA Quarterback was trying to throw away on purpose. It was probably a top ten play in my football career. Their QB was very good and didn’t make many mistakes. I also remember a play I made on a busted coverage in which I ran across the field and made a last second diving pass deflection. That play likely saved a touchdown that could have changed the outcome of the game. I’m really not trying to brag. I was always a cerebral lunch pail guy. I was known for having good hands and I took pride in catching the football. I never had the athletic talent of a Chris “Sugarbear” Franklin or the speed and quickness of a guy like Derek Jones. However, the VA game gave me confidence that I was going to have a solid senior year. After the game in small towns the fans usually go on the field and hug it out with players/friends/family prior to the players making their way into back to the locker rooms. It’s a great tradition.Well just to tell you how far a compliment can go I can vividly remember a Van Alstyne man coming up to me on the field in the post game ceremonies.  He came up to me and said “son you may be the best high school football player I’ve ever seen play.” He was wearing a VA shirt so I thought he was joking for sure. I downplayed it and told the guy that I didn’t even score a touchdown, but he stopped me and confirmed that he meant what he said. I shook his hand and told him thank you. So any way it just goes to show that I remember that and it happened 25 years ago. I challenge you to compliment someone today. Even a small compliment can make someone’s day. 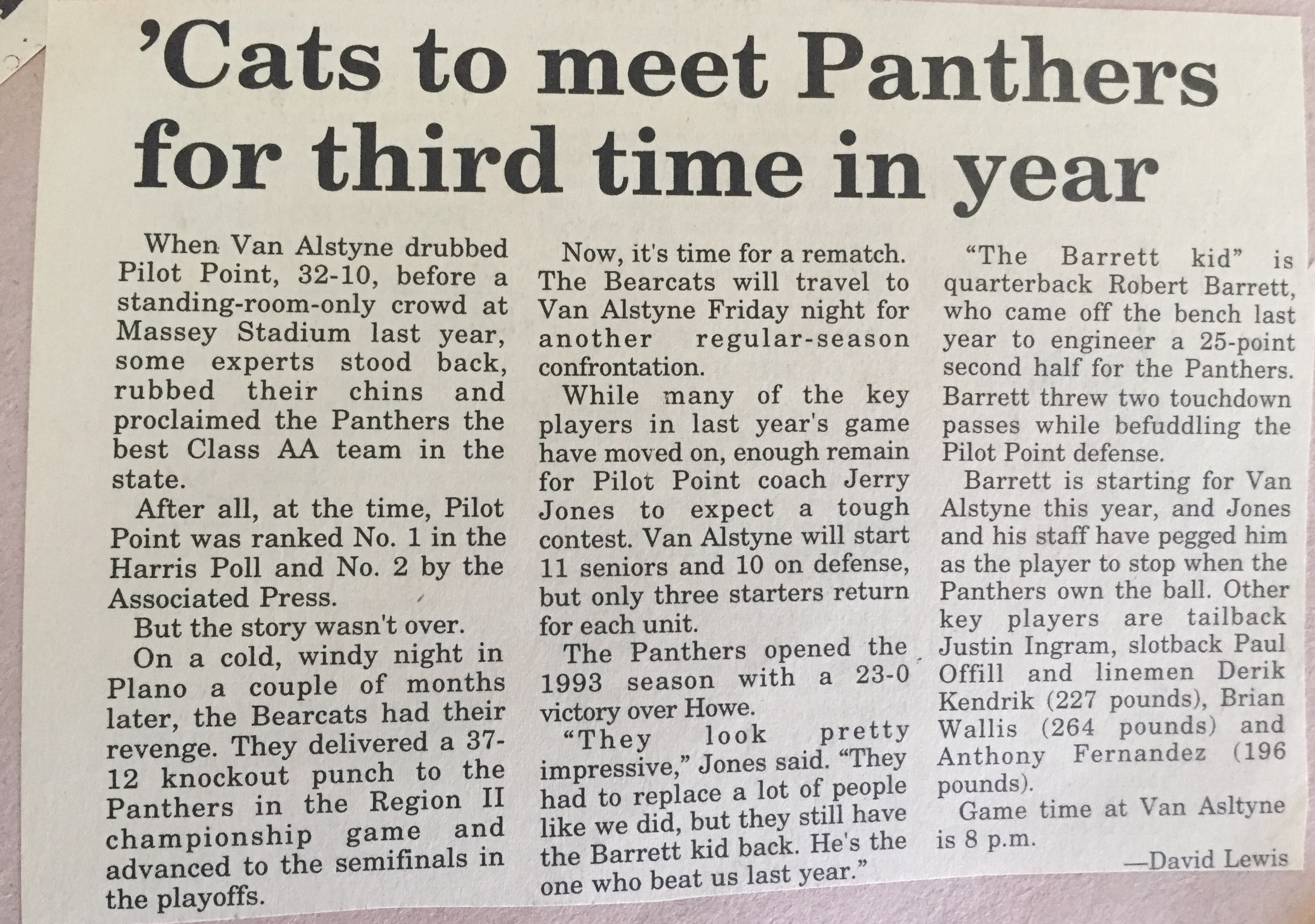 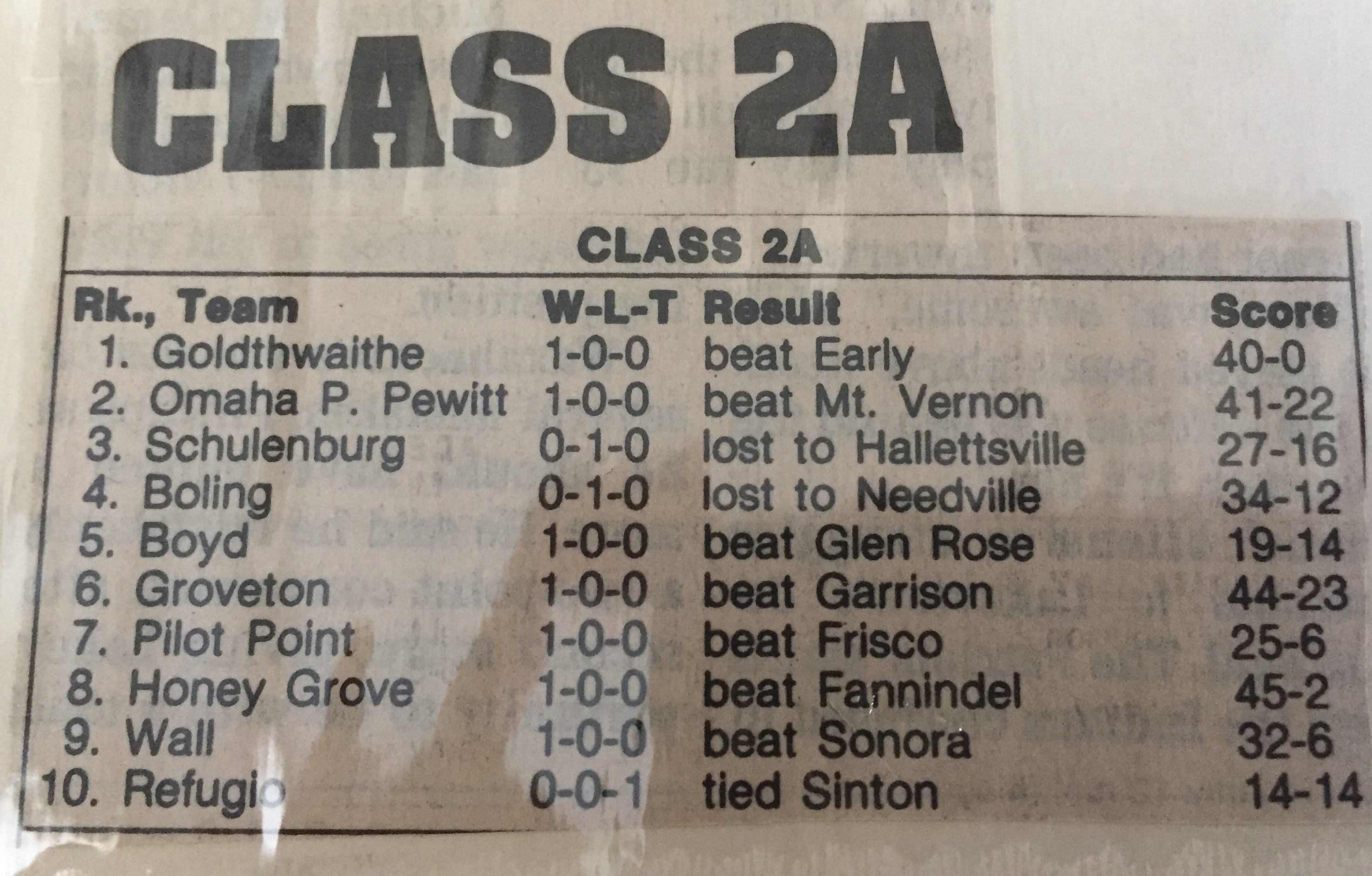 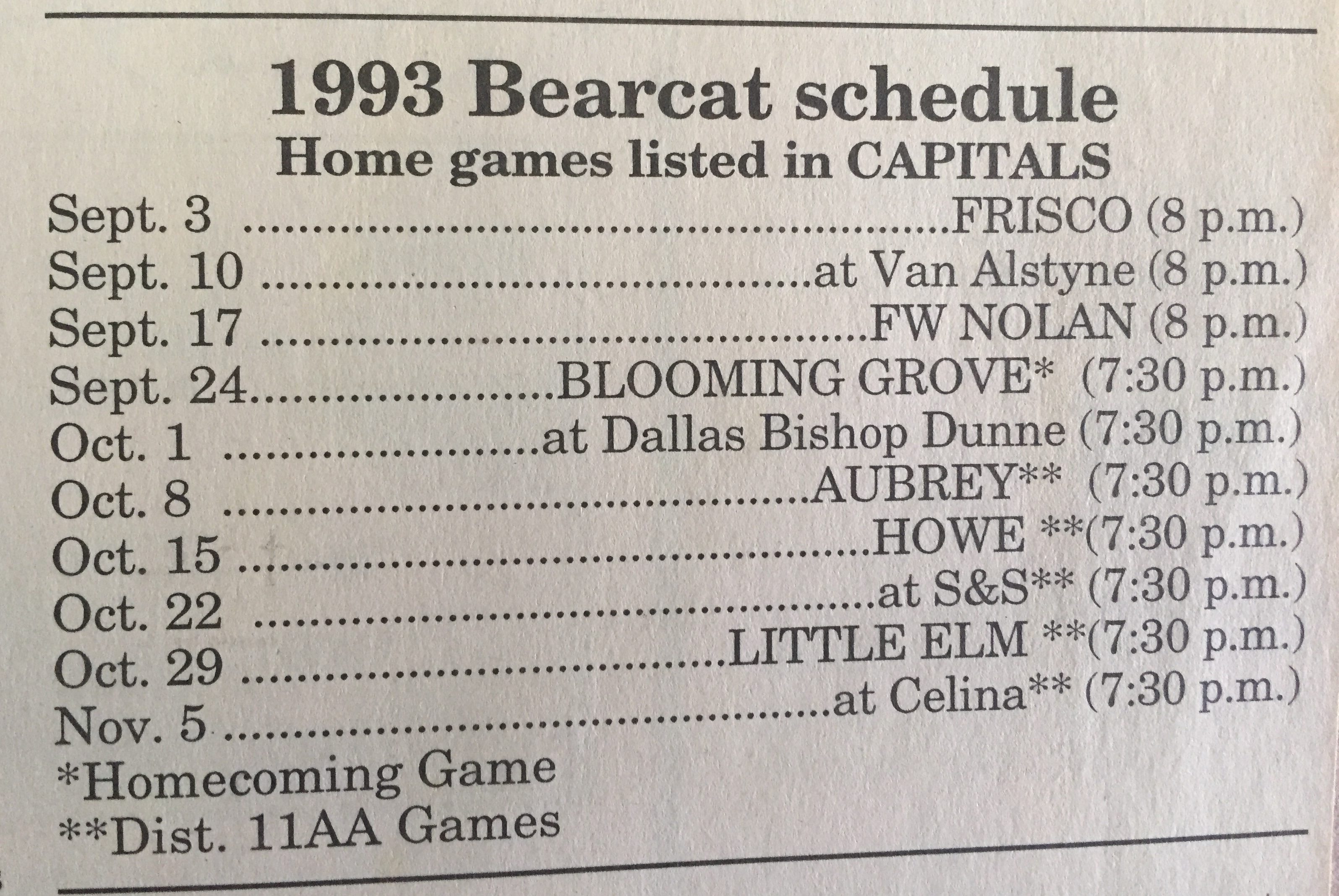 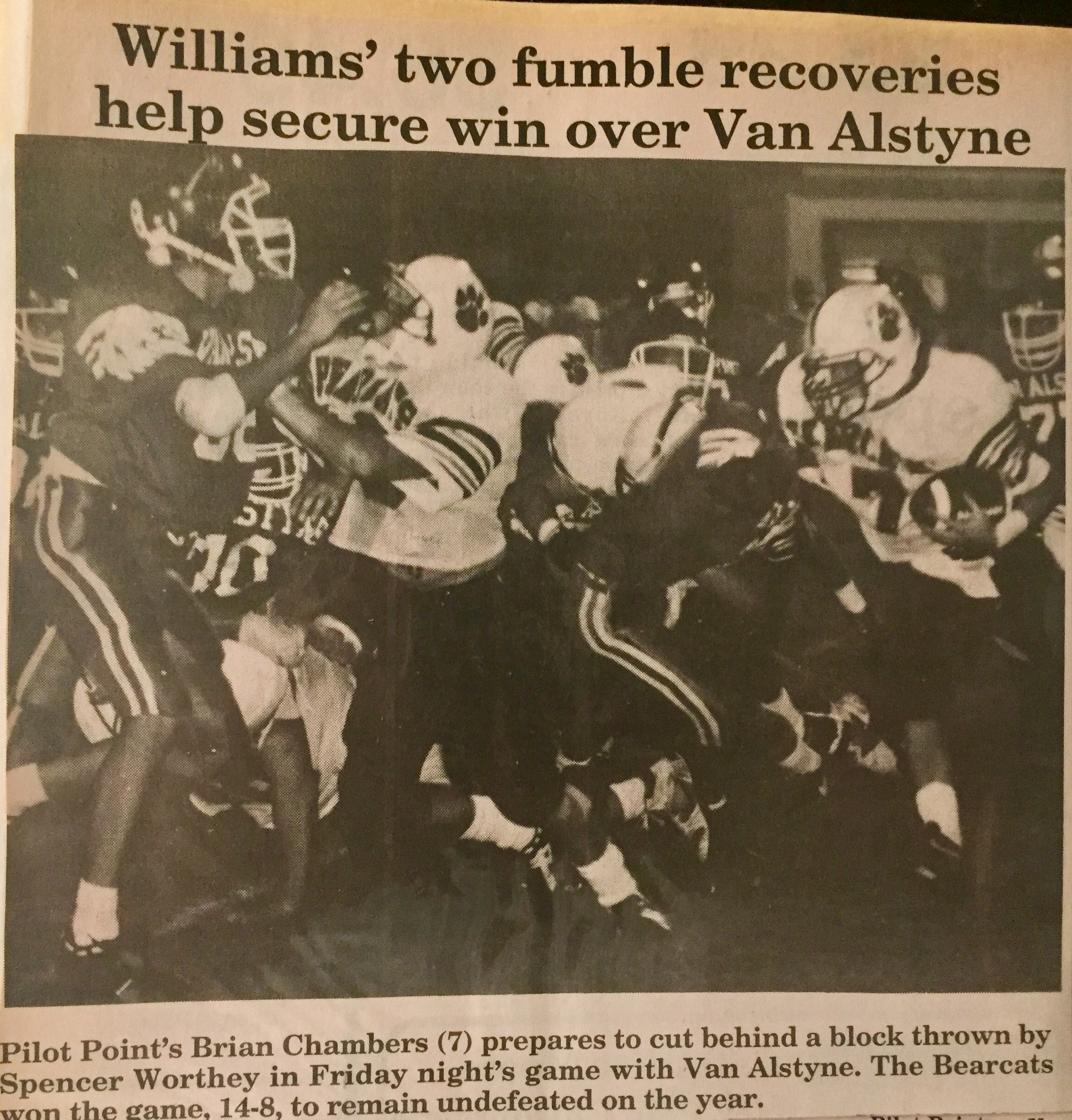 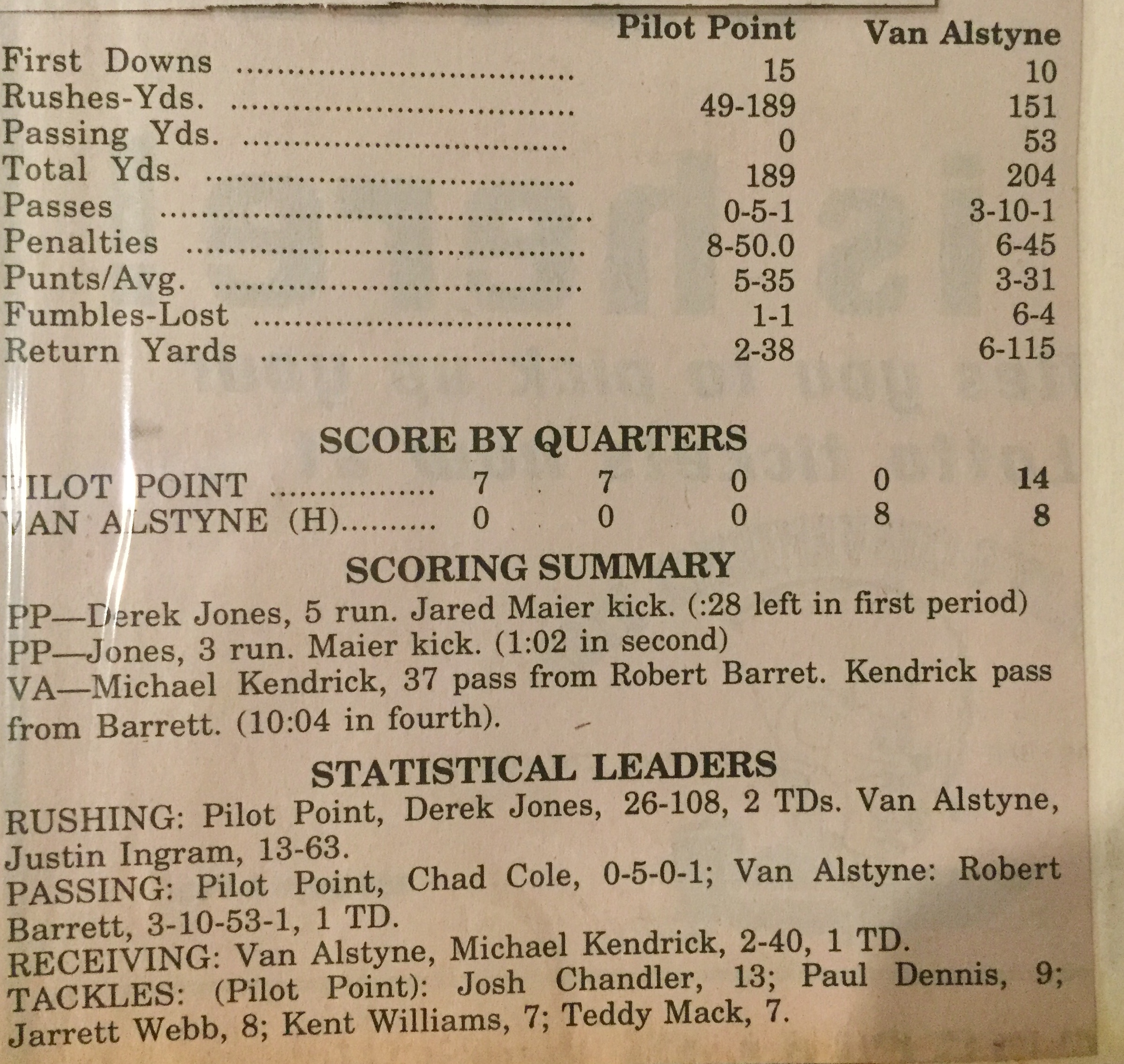