There are certain land marks and things that Pilot Point was known for back in the early 90’s. Stephen’s Grocery and the Dairy Queen are two spots that certainly come to mind. All of us High School kids either worked at one of those places or had friends/relatives that worked there at one time or another. But if we are being honest Allsup’s burritos were the true culinary greatness of Pilot Point in the early 90’s. Oh the late night or post practice/game deliciousness of the Beef n’ Bean or Chimichanga with some taco sauce…got to have the taco sauce. Two packets per burrito to ensure the proper sauce to burrito ratio. Who knows how long those fried pies of Tex-Mex goodness were under those heat lamps?! It remains a mystery to this day. 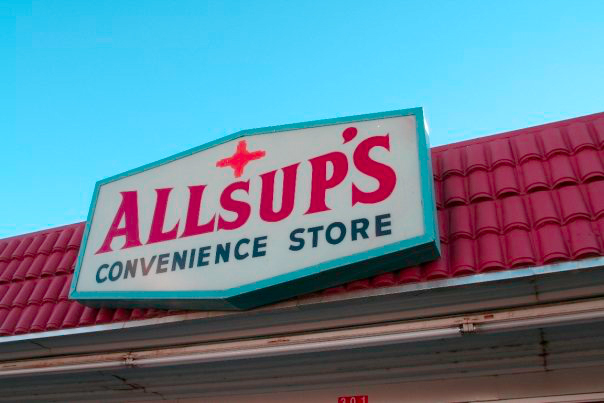 Speaking of mysteries there was one a big one in the weight room in the Pilot Point fieldhouse. When I first laid eyes on it I thought it was a medieval torture device not for practical use even in the early 90’s. It looked like something Dr. Frankenstein had developed in his lab in the 18th Century Germany. The only thing that made it seem as if it may have had a practical athletic purpose was the football sled-like padding attached to it and the treadmill like running platform. I’m not sure how many times I heard references to the “Dyno Monster” before I put two and two together and came to understand that the contraption I just described was the actual Dyno Monster. I heard it referenced to as many things including: our secret weapon, the most hated thing on earth, and a vomit inducer.
Ever get a queasy feeling in your stomach? Well everyone that experienced the Dyno Monster in all its glory likely has and may still just thinking of the memories. All I know is that Dr. Frankenstein in this case was Coach Lenny Gray. I love me some Coach Gray, but he no doubt took evil pride in manipulating that machine during off season football workouts. We typically did stations that lasted a couple of minutes each with a lot of high intensity / high reps. You really wanted to try to get on the Dyno machine early in the workout before you were really spent. Otherwise you could be in serious jeopardy of losing that Chimichanga all over the weight room floor. Many a Pilot Point athletics kid did “lose their lunch” at the expense of the Dyno Monster over the years.
I’m not sure exactly how it worked, but it was basically a treadmill up on a platform and somehow it had adjustable air pressure attached in which Coach Gray adjusted during each individual work out. You would put your head in between the padding and run/push against hundreds of pounds of pressure as hard as you could, like pushing a blocking sled, for what seemed like eternity (or 20-30 seconds).
Meanwhile Coach Gray would be either manically laughing at you and/or gently reminding you how un-masculine you were in order to spur you to do better. Then came the true test of manhood…the dismount. This platform was at least 4ft up in the air so when you finished your turn you had to hop down and face reality. And after pushing your legs to move as fast as they could against several hundred pounds of compressed air reality meant that in most cases your legs would give out when you jumped off the platform. Many a tough football player bit the dust hoping off that platform. That was just round 1. Now rest for about a minute as you would have 2-3 more rounds each with your group.
It was certainly a love/hate relationship with that thing. Secretly I hope it’s still in use in the Pilot Point weight room today. I’m sure it has since been ruled inhumane by bulldozer parents many years back like the phasing out of needed swats, but the Dyno did a lot of good for many years. Like I mentioned many people thought it was our secret weapon. We knew the Celina kids were likely pulling tires, but we felt that they had nothing on the Dyno Monster.
Unfortunately, I don’t have any illustrations of the Dyno, but here is a picture of a modern-day version. 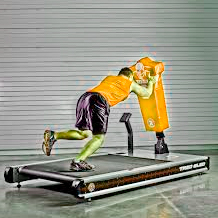