“Rome wasn’t built in a day.” That saying can apply to anything built over time.  In many cases it’s used to refer to dynasties. The Dallas Cowboys didn’t become “America’s Team” overnight.  They started in 1960 and it took Tom Landry, their Head Coach, over a decade to build them into a champion. Then Jimmy Johnson took them to another level in the early 90’s winning Super Bowls in 1993 and 1994. It was special playing high school football in the DFW Metroplex during that same early 90’s era of Cowboys dominance.


Along those same lines Pilot Point football success was built over many decades. I know PP started competing in football in the 1930’s and had varied success, but I like to think the standard for success started around the time when my Step-Grandfather’s (Lester Haynie) 1946 team won the Regional Championship. That was the pre-State Championship Era, so they won the highest honor that a football team could in 1946 beating Lewisville and then Wilmer-Hutchins via penetrations. That team went 10-0-2 and amazingly only gave up 18 points in the entire season. 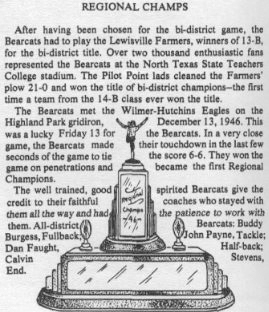 Then the more modern standard was set in the early 80’s when G.A. Moore Coached the team to two state championships. I’m sure every team after the 1980-81 Championship teams were keenly aware of the mark that had been set by the torch they were responsible for carrying. I know that my 92-93 teams were very aware.  At that time Pilot Point Selz High School was located across from the football stadium just off Highway 377. Located in front of the stadium just off 377 for everyone to see was a billboard
boasting the accomplishments of all the teams that came before ours. That sign served as a daily reminder of the expectation level. On a typical day in Pp you would drive by that sign several times. For me I just wanted to ensure that my 92 and 93 teams were listed on that billboard as many times as possible. That billboard is still there (a nicer more updated version than the one 25 years ago). 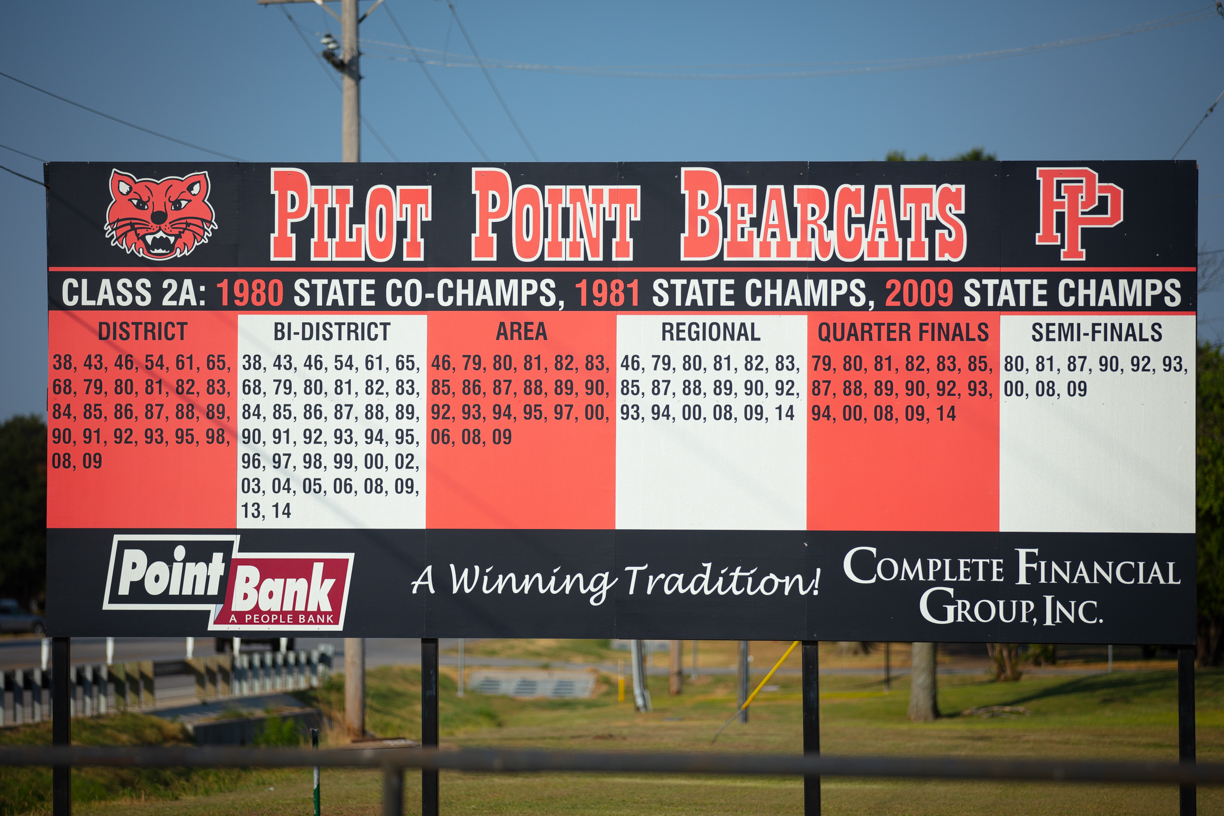 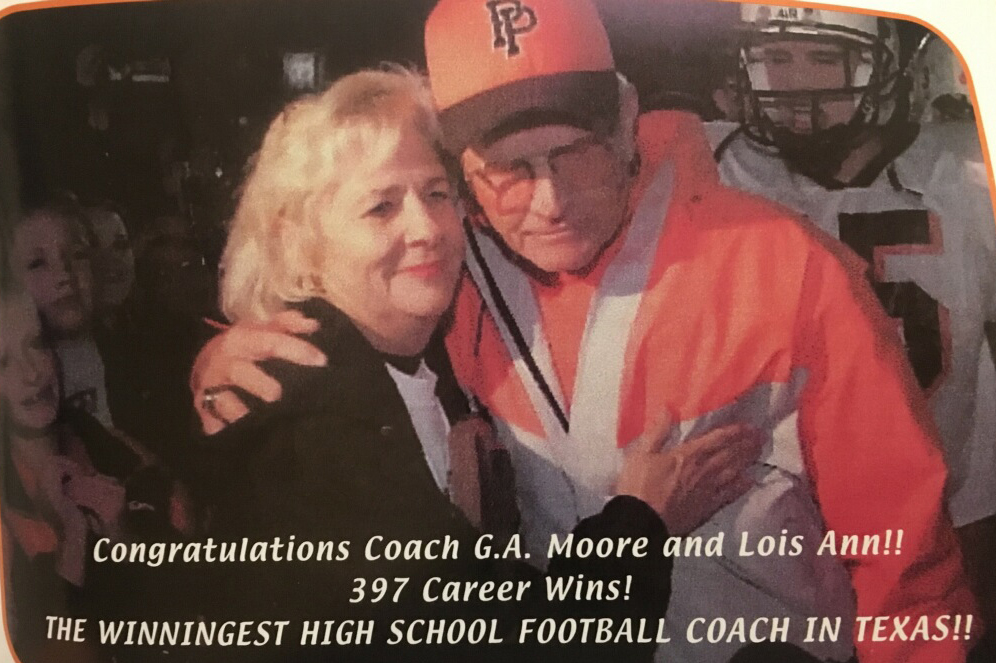 In 1992, my junior year, our expectation was to win a State Championship.  We had a great team and had an excellent season.  We went 13-1-1 and fell just short of our goal. We “lost” a tie game to Goldthwaite in the State Semi-Final game with a final score of 0-0. Unfortunately, games that ended in a tie were decided by penetrations (number of times your offense got inside the 20-yard line) back then and we came up just short. It was heartbreaking to work so hard for something and then “lose” 0-0?! To make matters worse early in that game Chad Cole connected with Rick Rogers in the back of the end zone for an apparent touchdown, but the officials ruled that Rick caught the ball out of bounds. It was an extremely difficult call, but we shouldn’t have left the game in the hands of the officials to begin with. Goldthwaite had an excellent defense and ran the Wishbone offense to near perfection. I can remember being involved in the most tackles in my football career in that game as they ran the ball nearly every play. Looking back that game is easily the most difficult athletic defeat I ever experienced.  We were potentially 1 play away from playing Schulenburg for a State Championship in the Houston Astrodome. It served as motivation going into the next season.
‍
So, going into my Senior year in 1993 we had the same basic expectation as we did in 1992. Win a State Championship. We lost several All-State players (William Clark, Russell Jones, and Brett Renfro) to graduation, but we were still loaded and felt like we would bounce back and compete for a State Championship. It was more difficult back then. Only 2 teams from each district made the playoffs and only 1 team won State in each classification.  Unlike today where they break each classification into a D1 and D2 based on enrollments and give out twice as many State Championship trophies. Dave Campbell’s yearly magazine was the bible of Texas Football back then as it still is today. They were underestimating us ranking us pre-season #9 in the state. That was fine with us. Took some pressure off really as I think we all thought we’d be ranked in the top 3 for sure. 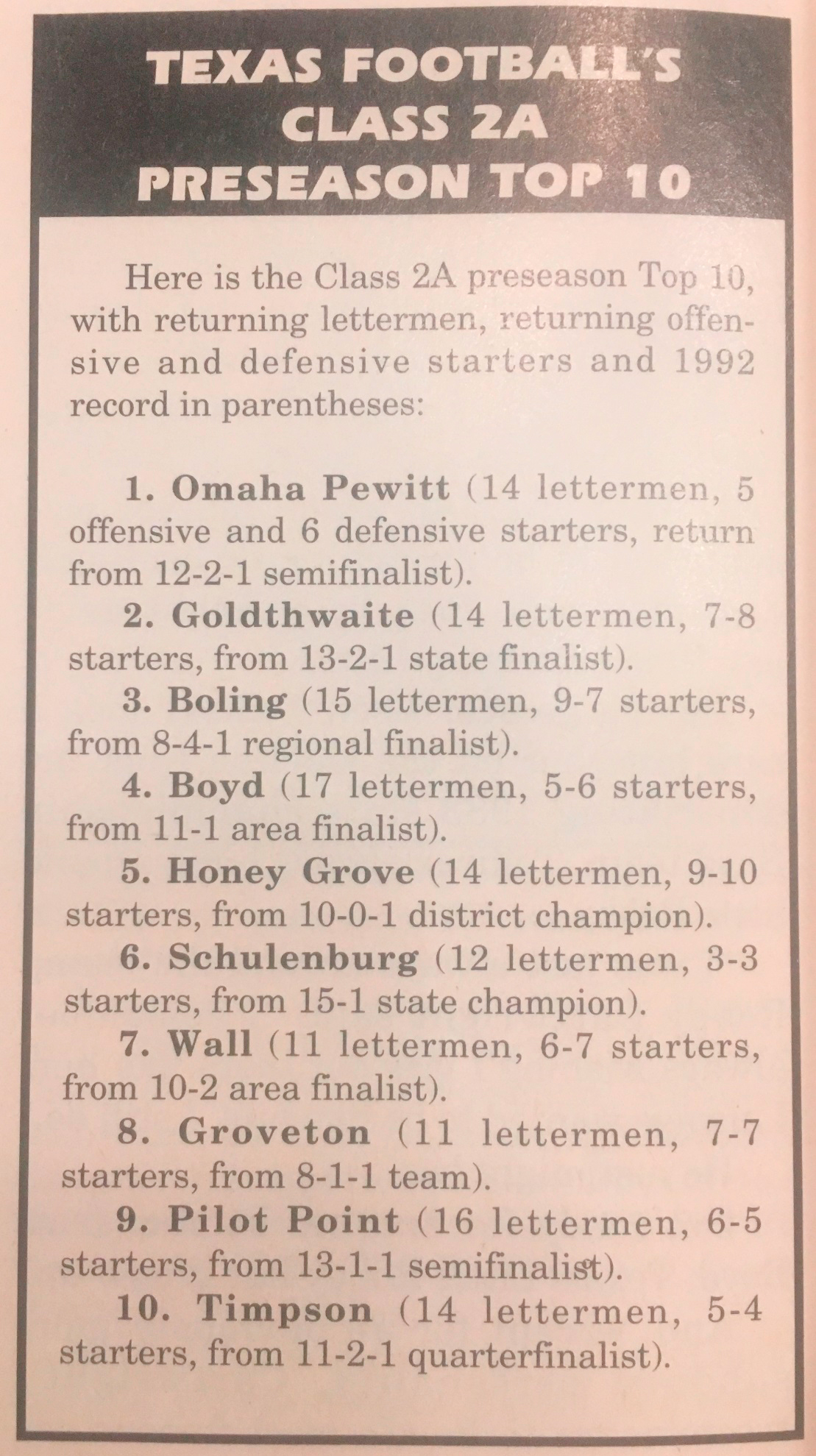 In the DFW Metroplex in the 80’s and 90’s Pilot Point was a 2A football dynasty. We had won like 19 straight district championships. We were known for Football. We had the top winning percentage in the entire State in the 1980’s edging even Odessa Permian. We knew every team we played would bring their “A” game against us. We knew it would make teams like Aubrey and Van Alstyne’s season if they just beat us in football. We weren’t going to let that happen though. What G.A. Moore and others had begun Coach Jerry Jones and his Coaching staff built upon. We took pride in our team and our town. We had championship expectations. Yet Somehow Dave Campbell’s magazine was sleeping on us. They made the Boyd Yellowjackets and their Coaches son Robby Cartwright the poster boy
of 1993 2A football. That didn’t sit well with us, but it also put a nice target on the Boyd Yellowjackets. 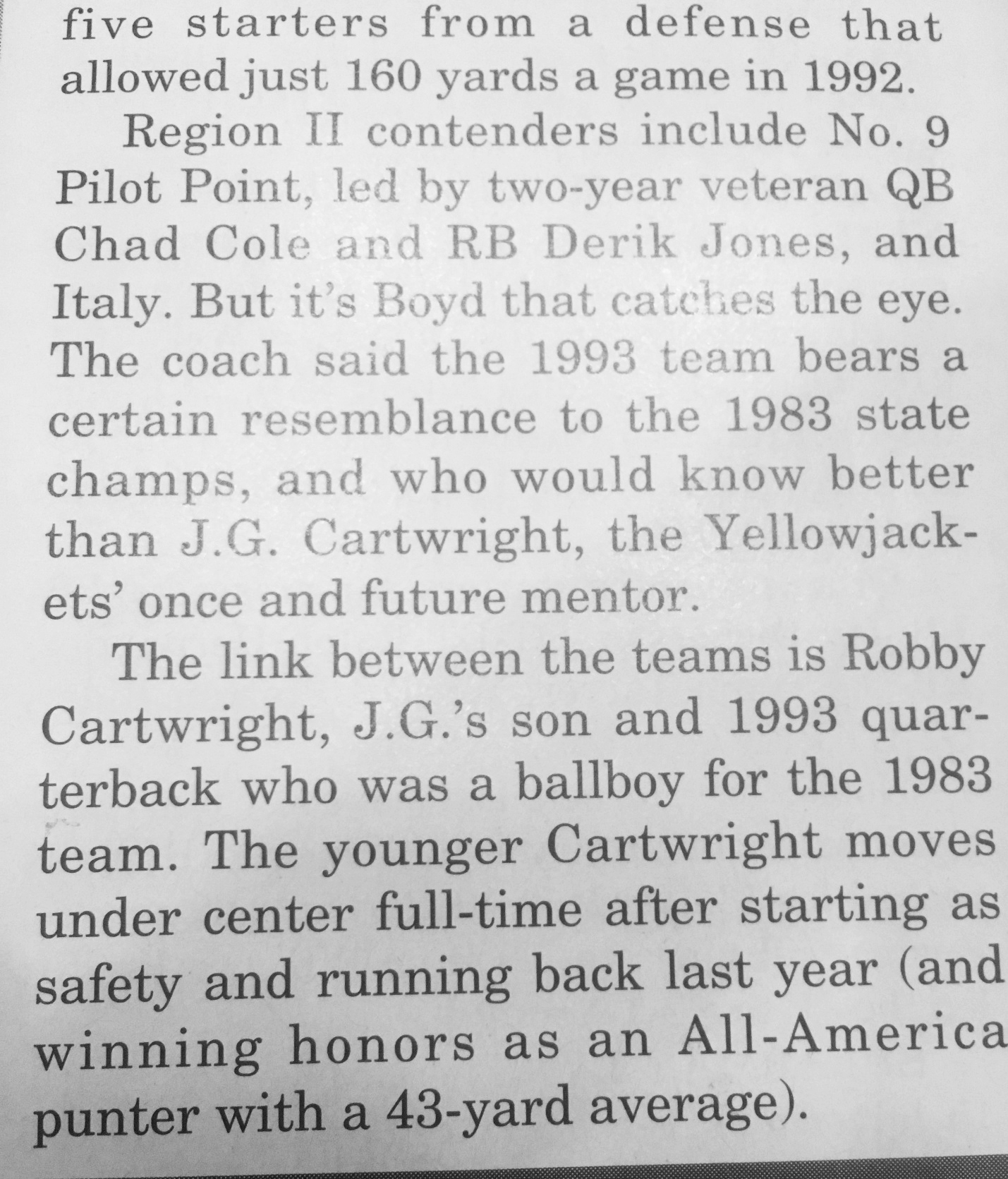