It’s Red River Rivalry week with Texas vs OU this weekend in Dallas.  Rivalry football games always seem to bring out more passion, physicality,and pressure to perform at your best. You have an opportunity to leave a legacy in rivalry games. You certainly don’t want to lose a rivalry football game.

On a much smaller scale it is no different when it comes to High School football and Pilot Point vs Aubrey. With both teams being situated within a few miles of each other on Highway 377 you grow up connected to each other in a lot of ways. I understand that my senior class lost to Aubrey in football when they were in 8th grade. I know that served as somewhat of a wake up call and they were determined not to let that ever happen again.

In 1993 we were coming into the game undefeated at 5-0, and ranked third in state, meanwhile Aubrey was off to a good start as well 4-1. I remember Head Coach Jerry Jones put together a focused game plan meant to stop Aubrey’s workhorse Running Back Jeremy Greenway. He had already amassed over 1,000 yards in the first five games of the season, so we knew it was going to be a good challenge for our defense.

We had won the previous year handily 55-14 and if you read my tenth installment then you know the story about how they lost the game before it had even started with their shenanigans over the public-address system. We were more gracious hosts in 1993. There were no pre-game jokes over the P.A. system. We didn’t need any additional fuel. Chris Franklin, aka Sugar Bear, had a 95-yard interception return in the second quarter and we never looked back. We won the game going away 35-12 and held Greenway to his lowest output of the year. The Coaches had challenged our defense to hold him under 100 yards and we did our job. He ended the game with 23 carries for 83 yards. Prior to our game he had been averaging over 200 yards a game. Tough dude though.I can still remember him puking several times during the game and he just kept on playing through it.

So honestly, I know Aubrey folks consider it a “rivalry game”, but at that point in 1993 Aubrey only had 1 win and 1 tie against us all-time. The current Pilot Point record against Aubrey is 32-6-1. It’s a one-sided affair. I’m glad to say my Senior Class did their part to honor the legacy in 1993.So that brought our record up to 6-0 for the season. Next up was another District foe the Howe Bulldogs.

R.I.P. Jarmon Johnson. The Bearcats lost an All-Time great this week. Thoughts and Prayers are with his family. 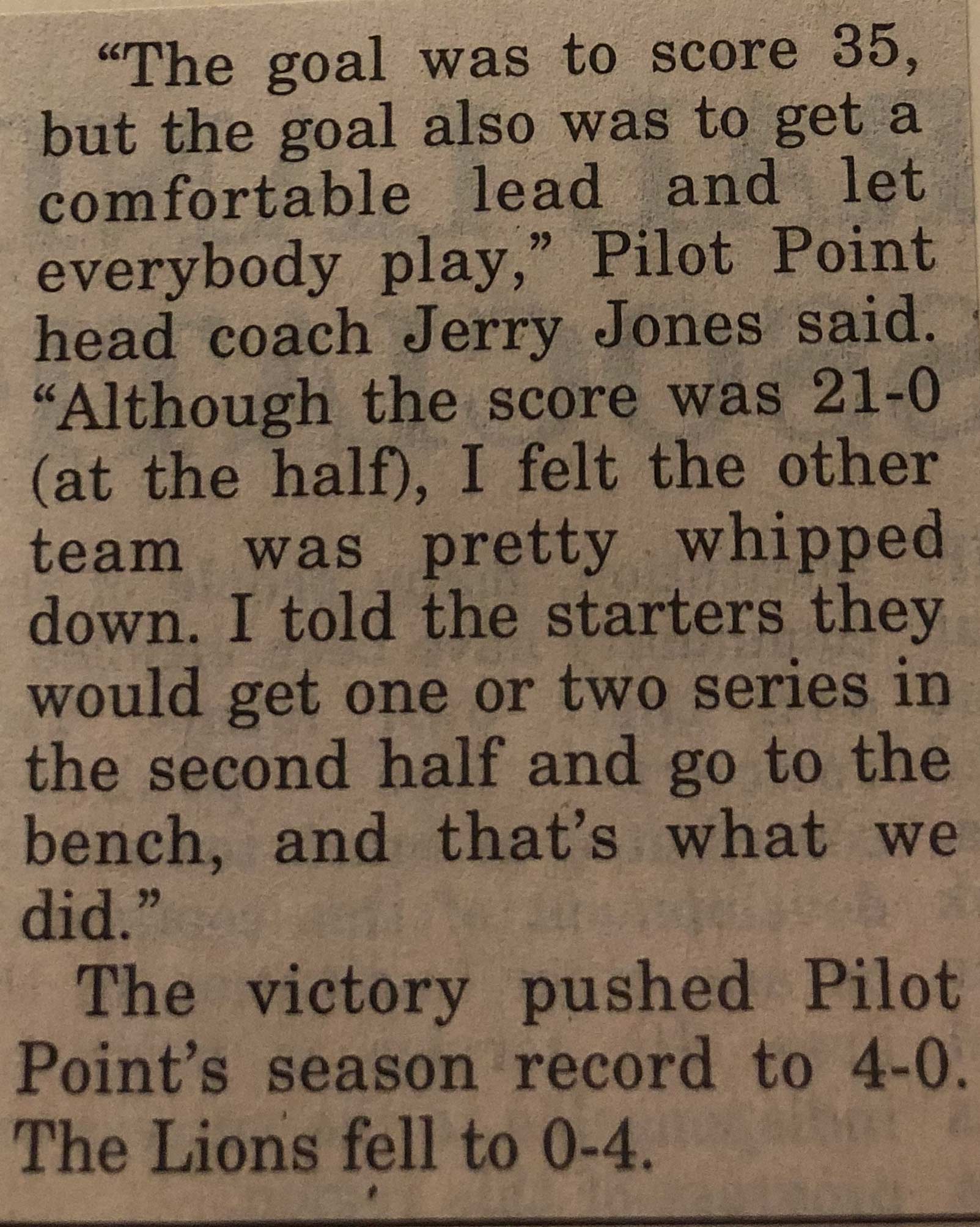